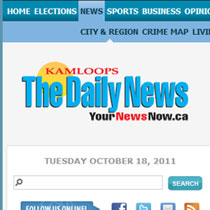 When Colin Harris learned that children today are likely to face a shorter lifespan than their parents, he knew he had a good reason to run across Canada.

Wearing a T-shirt that read, “Tell your teacher to take you outside,” Harris brought that purpose to an assembly at Beattie School of the Arts Friday morning.

“I’m just trying to encourage that message of balancing time in front of the screen with time outside,” he said. “I’ve worked in outdoor education for the last decade or so, so I think I’ve seen the benefits to children of spending time outside and research bears that out.”

Ninety-three per cent of Canadian youth don’t get the recommended minimum of daily exercise, a reflection of lifestyles altered by social change in tandem with technology.

The average student spends 53 hours a week in front a TV, computer or video screen. That is seen as a major contributor to an alarming increase in childhood obesity and Type 1 diabetes, not to mention unforeseen health risks later in life.

Harris is far from a lone voice in the wilderness. He represents Take Me Outside in partnership with The Child and Nature Alliance and KidActive. Parents, schools and children themselves are often aware of the problem, he noted. Reversing the trend is the challenge.

Rather then lecture his young audience, Harris drew them into a conversation. He first had three students run a few short laps across the gym.

He told the kids to ask their parents and teachers what they did as children after school. They were often playing outside.

“And so that’s happening less and less, and that’s causing a little bit of concern.”

The students themselves indicated they are aware of some risks, such as a lack of vitamin D and over-exposure to violence.

“Between the ages of five and 18, a child will see 42,000 acts of violence,” one student volunteered.

Inactivity, however, along with unhealthy diets full of sugary drinks and fast food, was Harris’s primary focus. Optimistically, he draws an analogy between technology and first love to suggest this may be a temporary phase for society.

“When you have that first crush on someone, you tend to forget about the other things in life,” he said before speaking with the kids. “Maybe that’s the case with technology right now.”

Harris set off from St. John’s, NL, in January and plans to reach Victoria later this month. He’s spoken to 75 schools en route.

Written by Mike Youds.  Click here to view the article as it originally appeared in The Daily News.

No Replies to "Kamloops : The Daily News"

Keep in touch with what we're up to through our monthly newsletter - subscribe here.

We believe in a future where spending time outside learning, playing and exploring is a regular and significant part of every student’s day.

Keep in touch with what we're up to through our monthly newsletter - subscribe here.

Journée Take Me Outside